Nothing better than a slice of good bread to enhance blueberry jam. For breakfast, for snacks or picnics, during your breaks of the day. We might sometimes forget the essential!

Spread the batter into the pie pan and arrange the blueberries. In a bowl beart the eggs and thick cream blended with sugar and flour. Pour this mixture on the fruits and put in the oven (thermostat 7). Let it cook for about half an hour.

How to bring down my soil pH between 4 and 5 to plant blueberries :

The trick is to put a handful of sulphur in fresh soil before planting yor blueberry shrub. 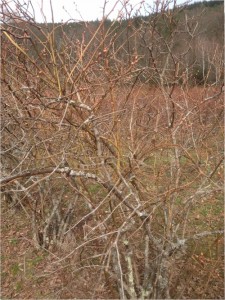 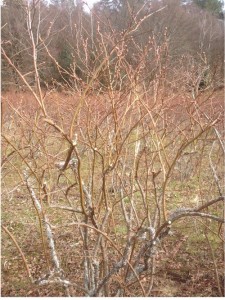 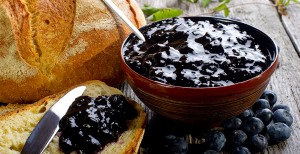 This recipe is quite simple to carry out : necessary ingredients are blueberries (i use frozen ones), sugar and citric acid (lemon juice).

I put together 5 kilos of blueberries and 3 kilos of sugar no more because my fruits are naturally sweet already and bring it to boil, let it cook for about ten minutes in order to reach 55 brix degrees ( brix being the unit to measure the sugar content, it is done with a refractometer).

I then remove the preparation from heat and add the lemon juice. Lemon juice helps acidifying the mixture and avoid jam ending up too runny.

I immediatly pour the whole into jars that i close and put upside down to pasteurize them naturally.

You can easily make about twenty 300grams jars with this recipe.

Happy cooking to you and remember that « blueberry protects eyesight in the long run ». 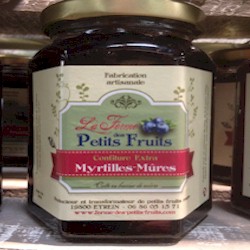